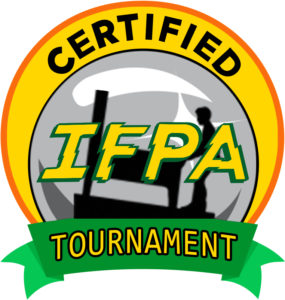 Given the tournament format, we must cap the number of players in each qualifying session. If you would like to play in the tournament, you should strongly consider pre-registering in advance! Online pre-registration will open on September 18, 2022 at 11am Central and will go until the tournament starts. You can also register at the show, but there is a chance there will not be openings remaining. Please check with tournament desk during registration hours if there are any available walk up spots. Players on the waitlist will be given first priority. Waitlist positions are non-transferrable.

All tournament details are subject to change prior to the tournament. Major changes will posted here and announced to all registered players.

UPDATE: Tournament is SOLD OUT.

UPDATE2: Special thanks to Jim Mueller for supporting the tournament by donating $300 dollars in parts to help keep the tournament running smooth. Thanks, Jim!!!!

Space City Pinball will be hosting a full WEEK of WPPRs, with a tournament every day of the week starting on prior Sunday.

Saturday (11/5 @1PM): Wormhole Monthly 4X at the Wormhole in Houston, TX. – All ages. $20 entry, games on free play. BYOB. parking is tight, but there is street parking on the cross streets of shepherd, or a huge parking garage at HEB a few blocks away (plus they sell beer!)

Sunday (11/6 @ 1PM): Einstein’s Drainiacs at Einstein’s Pub in Katy, TX – 21+ only. smoking no longer allowed inside if that has been keeping you away or will keep you away in the future.

Monday (11/7 @ 7PM ):  3x and Whiskey at Poison Girl in Houston, TX- 21+ only. there is some street parking on westheimer, but plenty more down the side streets. please bring quarters if you have them, but you can get change at the bar if needed.

Tuesday (11/8 @ 6:30 PM): Three Strike Tuesday at The Game Preserve in Spring,TX – All ages. $10 entry (make sure you tell them you are playing in the tournament to get this rate), games on free play. BYOB.

Tuesday (11/8 @ 6:30 PM): Space City Pinball: NASA Strikes Week of WPPRs at The Game Preserve in Webster, TX – All ages. $10 entry (make sure you tell them you are playing in the tournament to get this rate), games on free play. BYOB.

Friday (11/11 @ 10AM): Texas Pinball League at the Expo hotel – Preregistration is required!

The Belles of Space City will host a women’s pinball tournament at the Expo. Visit the Interstellar Showdown page to learn more.

There will be two unique qualifying groups (Early & Late), each following a 12 round match-play format. Each round, competitors will be placed in groups of four and play on one randomly chosen machine. Players will earn points based on how many opponents they beat in the round  (3, 2, 1, or 0). Points will accumulate across the twelve rounds to determine each players overall qualifying score. Players may only play in one qualifying group.

The top twelve qualifiers from each qualifying group (24 total) will compete in the finals for trophies and cash prizes. During finals, players will be placed in groups of four and will play three games. Players will score points on each game based on finishing position (4-2-1-0 scoring).  After three games, the two players from each group with the most points will advance to the next round.

The tournament is WPPR eligible, and expected to be IFPA certified (20% boost in value).

The tournament finals will be streamed live on twitch.tv/wormholepinball

Any questions about the tournament can be directed to spacecitypinball@gmail.com

The entry fee for the tournament is $60. Players are also responsible for separate entry into the convention. Entry fees will be used to cover costs of the tournament, trophies, and prizes. A complete breakdown of expenditures and prizes will be published on this page.

The tournament will follow the following schedule as closely as possible. Exceptionally long play or machine malfunctions may cause deviations from the schedule.

A Division Finals Round 1

A Division Finals Round 2

A Division Finals Round 3; Women’s Tournament in Space City Booth

A Division Finals Round 4

Please do your part to help the tournament run quickly and efficiently!

There will be 12 rounds of match play qualifying (Rounds 1-6 on Friday, and 7-12 on Saturday). Each round, players will will be placed in four player groups. Depending on the number of players, there may be three player groups. Each group will be randomly assigned a game to play. The software will attempt assign games that players have not played previously, though this cannot be guaranteed.

Players will be matched in a balanced fashion. This means that each round, players will be grouped with opponents that they have not faced before. Player order will be determined by the tournament software. At the end of each game, players will earn points based on how many opponents they defeated  (3, 2, 1, 0). For three player groups, scoring is (3, 1.5, 0). Results will be submitted by players via the matchplay software. Players must enter full scores for each game. We also encourage all players to take photos of their scores to verify results if they are challenged.

There will be two separate groups (Early & Late), each playing separately. Players may only play in one qualifying session.

Qualifying ties will be broken by playing for high score on a single, randomly chosen machine.Tiebreakers for each group will be played separately. Only critical ties will be broken, such as those that determine advancing to playoffs or byes.

Finals will follow a “PAPA style” format, with some modifications.  During finals, players will be placed in four-player groups based on seeding. Each group will play on 3 machines. At the start of each round, the highest seeded player of each group will choose all three  games for the round, starting with the highest seeded group. Players may not choose the same game two rounds in a row. Players will then choose player order for the first match, starting with the highest seeded player. All subsequent matches will be determined in reverse finishing order of previous match (i.e., last place chooses first).

Multiple groups may choose a game that has been selected by a higher seeded group, but it must be played as a different game number. For example, if group 1 chooses to play Iron Maiden on Game 1, group 2 can only play Iron Maiden as their Game 2.

Players will earn points depending on the finishing position of each game (4, 2, 1, 0). The top two players from each group will advance to final round (determined by points accumulated within the round). If two or more players are tied to advance at the end of the round, they will play a randomly chosen game (excluding any games previously played in the round).

Due to difficulty in administration/low enthusiasm in past years, we have decided to discontinue the B-Division finals. Most players who qualified for B preferred to attend the show instead. If you would like to see a return of B-Division, please let you opinion be known to the organizers.

A tentative game list will be posted here. This list is subject to change at any time. If you would like to lend a game to the tournament, please contact spacecitypinball@gmail.com.  Those who lend a game will receive a refund for their ticket entry after the show. We are looking specifically for alpha-numeric and newer games. Games must be in excellent condition.

All games have been graciously donated by local collectors and enthusiasts. They have poured their blood, sweat, and tears into these games. Simply moving them to the tournament was a lot of work. Do not abuse the games. Do not hit or kick the games. Players who abuse games will be issued warnings or ejected from the facility, depending on the severity of the offense.

Please refrain from loud yelling or cursing. It is distracting to other players, and reflects poorly on you and the community. Yelling or cursing at other players or tournament officials will result in a yellow card or red card depending on the severity of the offense.

During play, do not distract your opponent by talking to them (unless they talk to you or tell you it’s okay). Do not hover over their shoulders. Do not coach them or give them advice while they play. It is perfectly fine to talk/exchange high-fives between balls.

Please avoid “rage-tilting” a ball (i.e., intentionally tilting out of frustration). In addition to making you look silly, it is disrespectful to your opponent as they must wait for the tilt bob to settle before starting their ball. This also increases the total duration of the tournament.

Extra balls will be disabled. However, if you are awarded an extra ball, you may play it.

Pinball machines are mechanical in nature, and thus often produce unintended behaviors. Moreover, many of these machines are very old! If a game malfunctions in any way (e.g., flipper breaks, debris on field, game reset, etc.), please ask the tournament director for a ruling. The director will attempt to repair the machine without sacrificing the game. If this cannot be done, a new machine will be drawn and all progress in the original game will be lost.

If a ball becomes stuck during single-ball play, notify the tournament director for help. The ball will be placed on the right or left flipper, determined by the side of the game the ball became stuck on.

All entry fees, minus expenses, will be paid back to players who finish in the top 16. These will be posted below, when available. Payouts will be distributed via Paypal or Venmo after the show has concluded and all expenses are settled. Players are responsible for handling any tax implications.

Online pre-registration for the tournament will begin at 11AM, central time, on September 18, 2021, and will continue until the beginning of the event. Please have your IFPA number ready. You can register online via eventbrite. Information regarding pre-registration is located on the eventbrite page.

You may also register for a qualifying session at the show, during the corresponding registration period (see schedule above)

A list of registered players will be posted here when it is available.

The waitlist is up to date as of September 24, 2022. We will not make updates unless there are substantial changes. If you added your name to the waitlist on or after this date in may not appear for a while.